To share your memory on the wall of Christine Webster, sign in using one of the following options:

Provide comfort for the family of Christine Webster with a meaningful gesture of sympathy.

It is with great sadness that the family of Christine Clark Webster announces her peaceful passing on May 17, 2019 in Greenwich, CT. She was 101 3/4 years old. She was a very accomplished woman who lived a long and rewarding life in service to others.
Christine was born in Philadelphia in August 1917, the only child of Frederick Douglas Clark and Christiana Banks Clark. The Clark family moved to the suburbs, West Chester, Pennsylvania, where they suffered through and survived the Flu Pandemic of 1917. She attended the Gay St. Grammar School and later graduated from West Chester High School. As a child she enjoyed playing tennis and taking dance lessons. Her interest in music started at age 9, when she started taking piano lessons from a nun at St. Agnes Catholic Church in West Chester, PA. Christine went on to attend what is now West Chester University (previously named West Chester Teachers College) graduating with her Bachelor of Arts Degree in Music Education focusing on piano, violin, and cello. During her college years, she took Modern Dance one summer in NYC with Martha Graham and also met Leopold Stokowski at a Eugene Ormandy orchestra rehearsal at The Academy of Music in Philadelphia. She then earned a Masters Degree in Music Education from the University of Pennsylvania in 1940.
Unable to find a teaching job in West Chester at that time, despite her education and degrees, Christine’s first job was in Albemarle, North Carolina teaching music and choir to elementary school students for two years.
Her next teaching post was in Bluefield, West Virginia, at Bluefield State Teachers College, where she taught music courses and directed the choir. She met a student, Harry L. Webster, who became her future husband. The couple moved back to West Chester, PA, to work and raise their family, which grew to three children: Dennis, Clark and Donna. Christine balanced being a full-time mother with giving piano and dance lessons in the basement studio at their home on Lafayette Street until Donna was 6 years old. She then returned to teaching elementary school music which she did for over 35 years in the Wilmington, Delaware and West Chester, PA School Districts.
After her retirement, she faithfully volunteered at Chester County Hospital in West Chester, PA for over 25 years. She enjoyed her gardens at her home in East Goshen (provided by her son, Clark), and the company of old friends from childhood and new friends and neighbors she met along the way. She later moved to an assisted living facility in Rye Brook, NY for several years, to be closer to her daughter, before moving to Greenwich. She particularly enjoyed the music programs, performances by area school children, flower projects, Bingo and the gardens at The Nathaniel Witherell Nursing Home and regularly attended church services in the chapel provided by Christ Church Greenwich Lay Ministers.
She is survived by her three children, Dennis O. Webster (Gretel) of Chicago, Ill., Dr. Harry Clark Webster of Boston, MA and Donna Webster Hunter (Roberto) of Greenwich, CT., 5 grandchildren (two others, Christopher and Heather, pre-deceased her) and two great-grandchildren, along with many friends and relatives.
Christine will be greatly missed by her family and the many friends that she made over her long life of giving kindness to others.
Funeral services will be at St James the Less in Scarsdale, NY on Saturday, May 25 with Visitation starting at 10-10:45 am and Funeral Service at 11 am. Funeral arrangements have been entrusted to Castiglione Funeral Home in Greenwich CT. Online remembrances may be made at www.Castiglionefh.com.
The family requests that in lieu of flowers, contributions can be made in her memory for classical music programs at Christ Church Greenwich, 254 E. Putnam Avenue, Greenwich, CT 06830 or St. James the Less, 10 Church Lane, Scarsdale, NY 10583.
Read Less

We encourage you to share your most beloved memories of Christine here, so that the family and other loved ones can always see it. You can upload cherished photographs, or share your favorite stories, and can even comment on those shared by others. 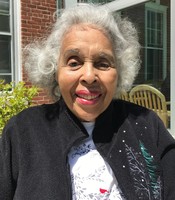