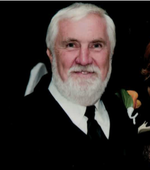 Donald "Butch" Daly passed away peacefully at home September 26, 2019 at the age of 75. Born March 11, 1944 in Greenwich, where he lived all his life. Butchie worked up until a few years ago working for many years at CT Natural Gas until his retirement in 1999. He worked many jobs over the years including Mcardles, McMillan's, Kennedy Security, even owning his own businesses in landscaping and refuse. He is survived by his wife of 52 years, Margaret of Greenwich. His son Timothy (Kelly) of Norwalk, beloved cat Rusty and many, many Hess trucks that he collected over the years. Also his brothers Thomas and Edward, both of Greenwich, sister Betty Rodney of Stamford and many nieces and nephews. The family would like to thank Dr. Allison Ostroff, and the wonderful caregivers at Angelic Elderly Care and Constellation Hospice. Friends and family may visit at the Castiglione Funeral Home 544 Old Post Rd #3, Greenwich CT on Monday September 30 from 4-8PM. A funeral service will be held on Tuesday October 1 at 10AM in the Funeral Home. Entombment will follow at St Mary Cemetery in Portchester. In lieu of ﬂowers, the family would like donations made to the St. Jude Children's Research Hospital. Stjude.org