To share your memory on the wall of Nicola Pelle, sign in using one of the following options:

He is survived by his wife Deanna, three daughters whom he loved very much, Elizabeth Lavin (Ramon), Nicole, and Sofia as well as his three furry companions Daisy, Stella and Louie. He is also survived by his mother Maria, brother Salvatore (Lisa), father-in-law Douglas Finocchio, brother-in-law Douglas Finocchio Jr. (Jill) and many uncles, aunts, cousins, nieces, nephews and friends in both the United States and Italy.

He immigrated from Italy to the U.S. in 1976 and soon after brought his parents and brother back to settle in Norwalk, CT. He then began working for Shoreline Pools for over 25 years and his most recent employment was with O&G Industries where he contributed to many projects and dedicated his hard work to build the Sono Collection Mall in Norwalk. He was also a member of Local 146.

Nick was a hardworking man as well as a loving family man. Playing cards with his children, restoring his 1989 Corvette, and playing the accordion were just a few of his favorite things. In his spare time, you could find Nick in the Amish country of Pennsylvania where he enjoyed hunting and spending time with his friends.

He is predeceased by his father Bruno, his brother Giuseppe, and his mother-in-law Rosalie Finocchio.

He was a member of Harvest Time Church in Greenwich, CT where the service will be held on Saturday, October 26th at 11:00 am.

The family would like to thank all of the doctors, nurses, and staff who cared for him during this difficult time.
Read Less

To send flowers to the family or plant a tree in memory of Nicola Pelle, please visit our Heartfelt Sympathies Store.

We encourage you to share your most beloved memories of Nicola here, so that the family and other loved ones can always see it. You can upload cherished photographs, or share your favorite stories, and can even comment on those shared by others. 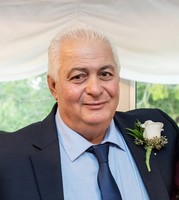