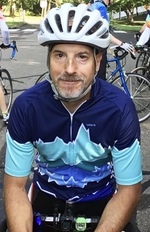 John was born in Queens, New York on March 31, 1966 and lived in Greenwich his entire life. He
graduated from Greenwich High School in 1985. As an avid cyclist, even before his days at Buzz’s
Cycle Shop, he traversed thousands of miles across Connecticut on his many different bicycles,
usually adorned with his signature mohawk helmet. John was never more vibrant than when he was
on his bike, talking about biking, or tinkering with bikes, and despite two heart valve replacements,
he never went very long without a ride. He was an active and beloved member of the cycling group
“Sound Cyclists Bicycle Club” and was not only elated but truly honored when he became a ride
leader. John was lauded for his ride leadership skills and his enthusiasm and patience to ride with
cyclists of all abilities. Along with the mechanical skills to fix most any problem occurring before or
during the rides, it was his humor and giant heart that made riding with John such a memorable
experience.

John cherished living in Greenwich and one of his favorite places was Greenwich Point Park. He
would ride his bike there as often as he could, regularly stopping to tell a joke or a story and chat
with friends and acquaintances, of which he had many.

He was a collector of classic model cars, a music lover, and a dedicated sports fan who fervently
followed the New York Mets and the New York Giants, as well as the Kansas City Royals and the New
Jersey Devils.

John worked many years in the auto parts industry in sales and delivery and was legendary around
town for his quick wit and sense of humor. He eventually found his work family in 1998 at Triple J
Auto Parts in Stamford. He followed them into their retail shop, A Buck & Up, where he
continuously made customers smile each day.

In lieu of flowers, the family requests that donations be made to the Friends of Greenwich Point
https://www.friendsofgreenwichpoint.org/donate in John’s honor.